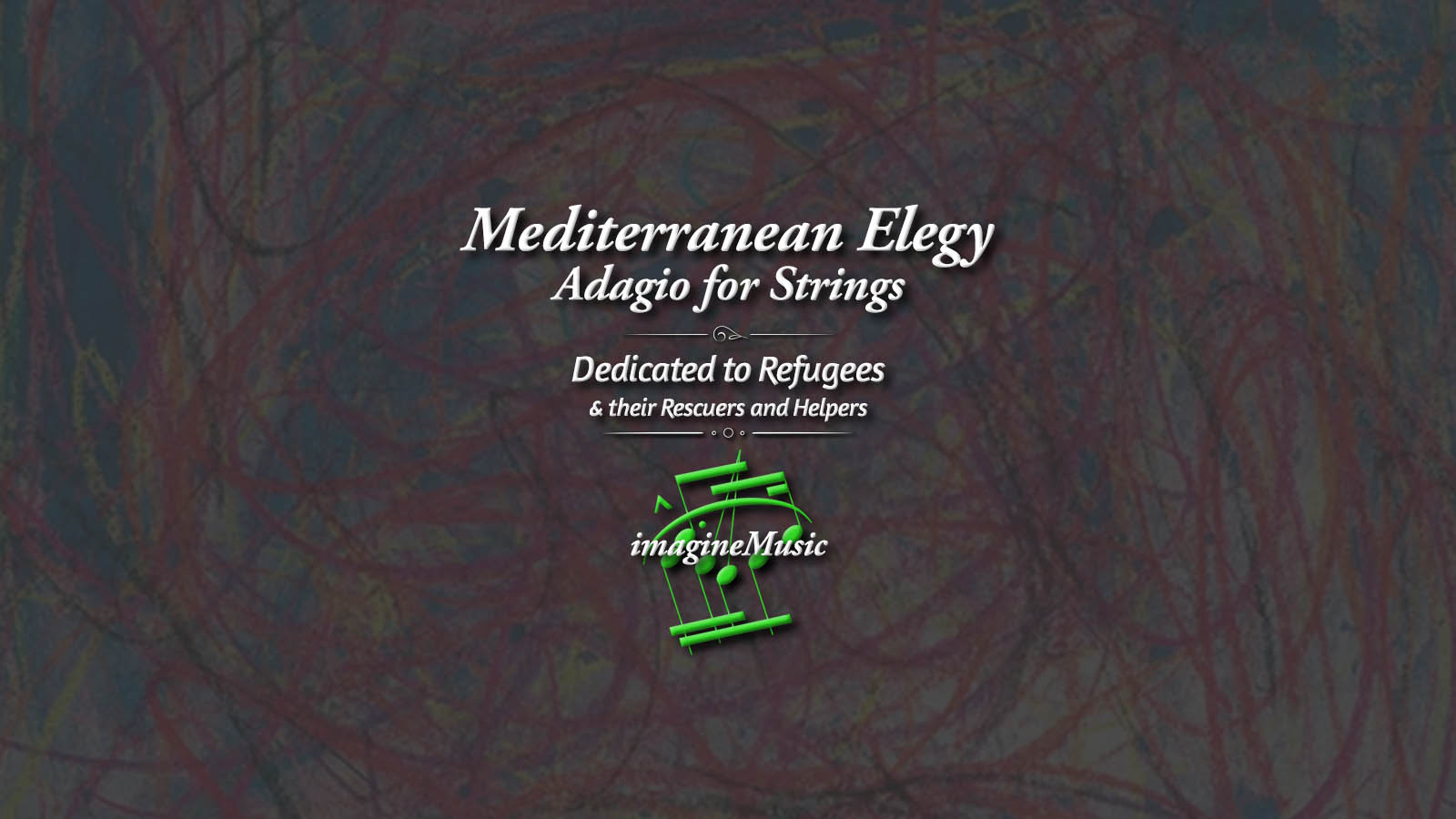 Dedicated to Refugees
& their Rescuers and Helpers

The Mediterranean Sea has been for many years now the route to Europe for refugees who flee from war-conflict and impoverished countries, in order to escape from violence, abuse, and exploitation.

Until February 2022 these refugees were coming mostly from Asian and African countries, but after the war in Ukraine this is not the case anymore. Though there is a tendency of discrimination among refugees depending where they come from, the truth is that regardless their origin they struggle the same. They lost their home and their safety …

Some compassionate and courageous people came to their rescue.

A music composition which I have been working on the past few months is titled “Mediterranean Elegy“, it is an Adagio for Strings, and it is dedicated to Refugees and their compassionate and courageous Rescuers and Helpers. Excerpts of the music you can listen to on the video presentation below.

Become a Patron
The composition is in progress.
Check out how you can support and help towards its completion,
and what benefits you get as a Patron.

The composition is in progress, and you can read on this page of how you can help towards its completion. 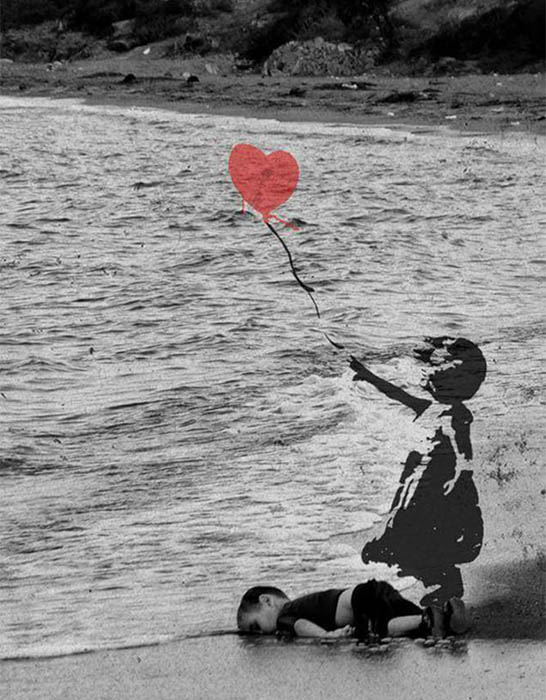 The most tragic aspect about the Refugee Crisis is how children are affected. One of the most noted stories is that of Aylan Kurdi, the two-year-old Syrian boy that drowned on the way to Greek island of Kos when his family was trying to flee Syria. The photograph of Kurdi’s body caused a dramatic upturn in international concern over the refugee crisis. (Read more here) 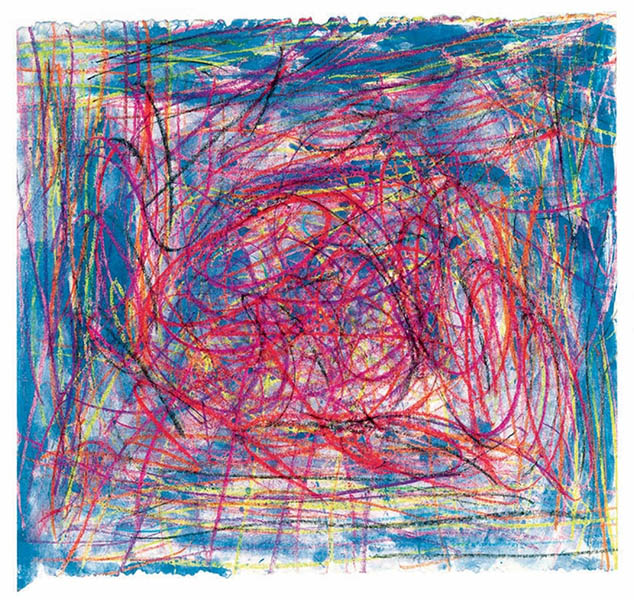 This is a drawing of a Syrian 12-year old boy named Jamal who has spent most of his life on the run or detention in refugee camps. The drawing depicts the harsh conditions of his life. Read more about him and his family here.

Below are listed some of the courageous Rescuers & Helpers that helped save the lives of refugees.

He was a Coast Guard Lieutenant, and he was called “The Hero of the Aegean” for saving many refugees’ lives in the Aegean Sea. 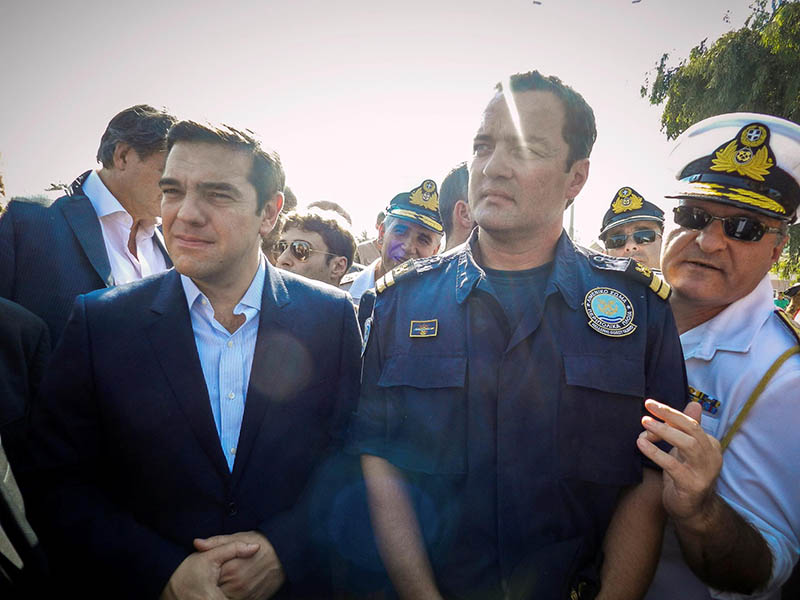 His efforts were featured in the Oscar-nominated documentary “4.1 Miles” by Daphne Matziaraki. He unfortunately died on October 9th, 2018, at the age of 44. More about him here. 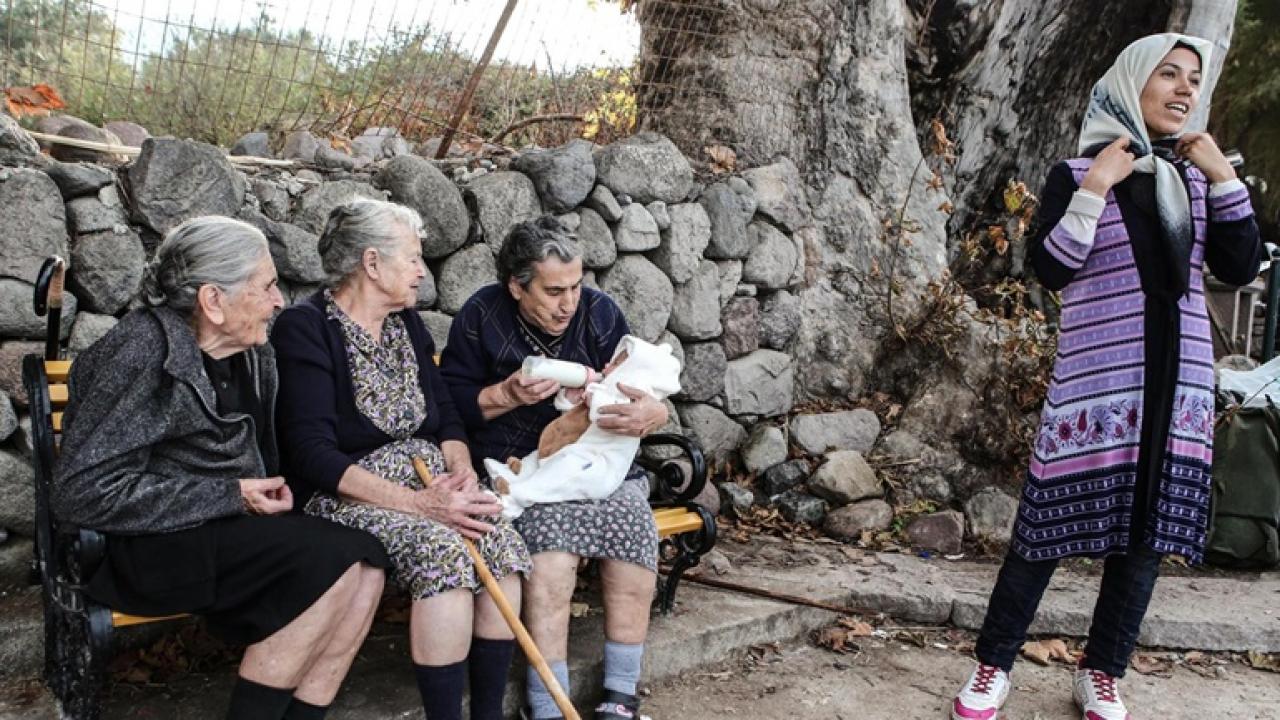 Three elderly women, who became known as the “Lesvos grannies,” captured by a local photographer (Lefteris Partsalis) helping a young Syrian mother who had just landed on the shores of the eastern Aegean island after making the treacherous crossing from Turkey in October 2015.

The image of the three women tending to the infant as its mother changed into dry clothes was published around the world and prompted a Nobel Peace Prize nomination for Lesvos’s residents in 2016. Thus they became an international symbol of solidarity! 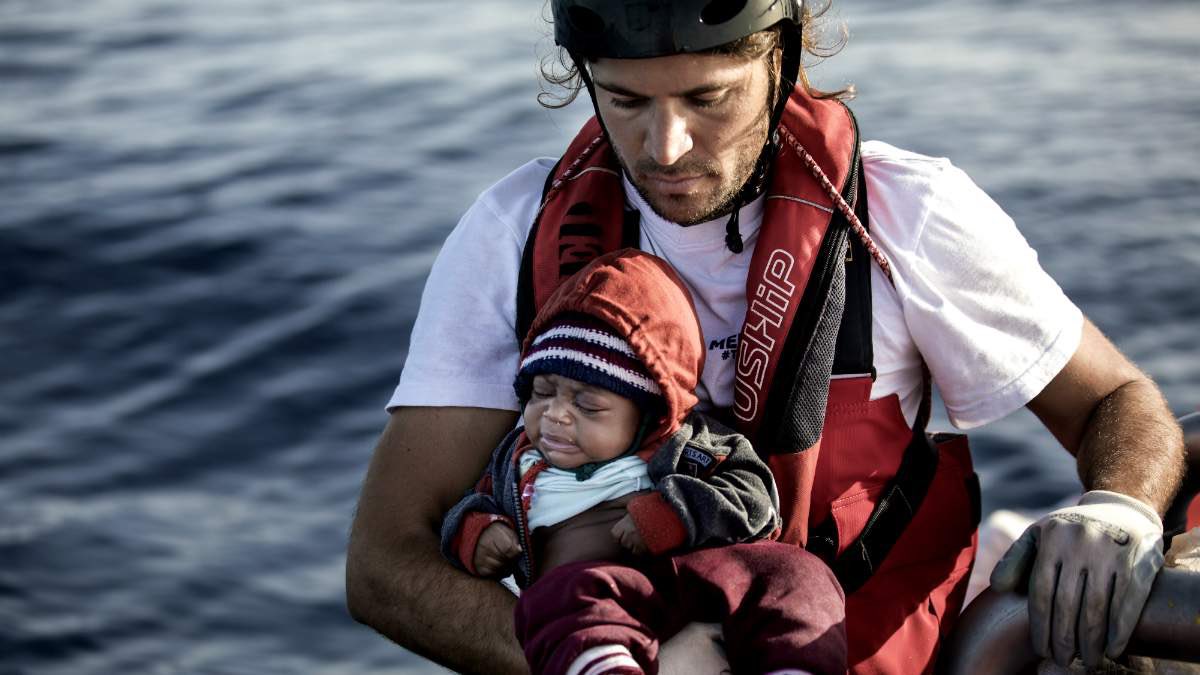 Rescuer Apostolopoulos is internationally acknowledged and honored for his humanitarian work rescuing refugees and migrants on the Aegean and the Mediterranean Sea. 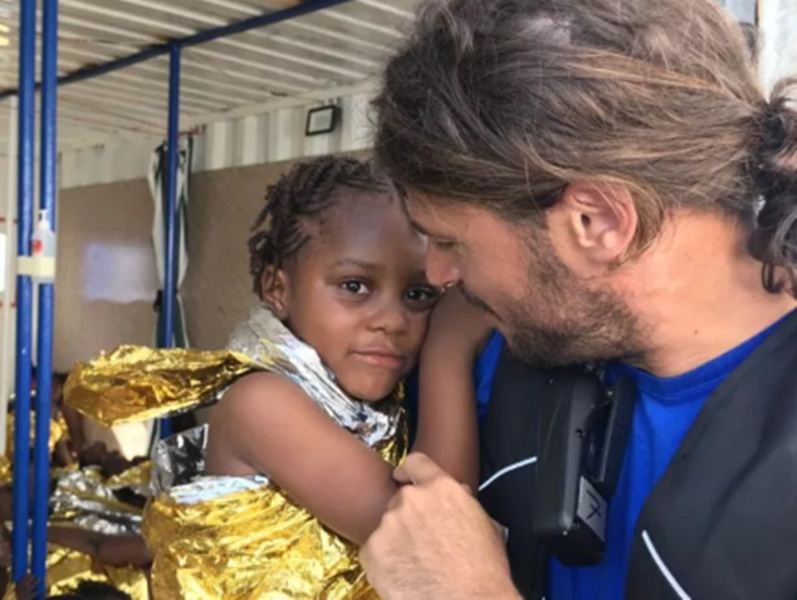 He was to be awarded in Greece the “Order of the Phoenix” for his humanitarian work, but unfortunately it was canceled the last minute. Most probably the cancellation was because he had criticized pushbacks and the migration policy of the European Union. 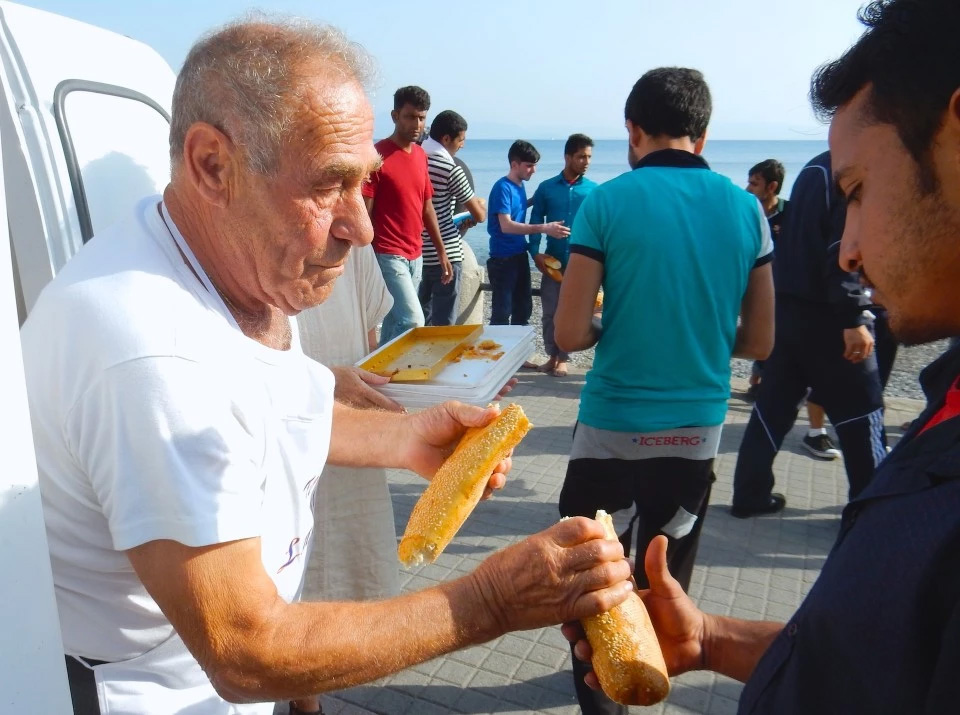 He was called “the baker of Kos island“, and he was distributing 100 kilos of bread almost daily to refugees.

He was praised by EU Commission President Jean-Claude Juncker in 2015:

“Pushing back boats from piers, setting fire to refugee camps, or turning a blind eye to poor and helpless people: that is not Europe. 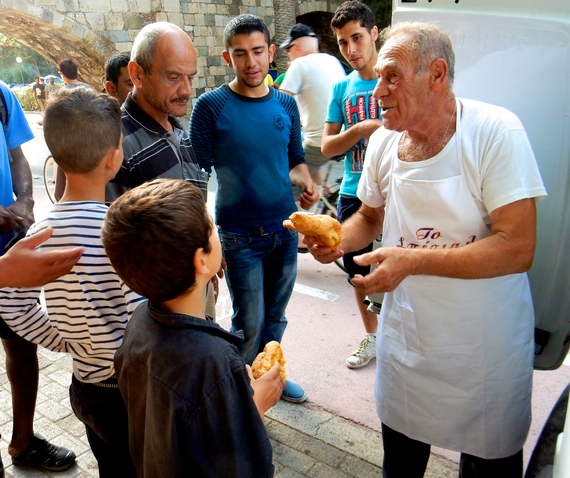 Europe is the baker in Kos who gives away his bread to hungry and weary souls. Europe is the students in Munich and in Passau who bring clothes for the new arrivals at the train station. That’s those at the Munich rail station applauding and welcoming refugees. The Europe I want to live in is illustrated by those who are helping. The Europe I don’t want to live in is a Europe refusing those who are in need.”

Become a Patron
The composition is in progress.
Check out how you can support and help towards its completion,
and what benefits you get as a Patron.